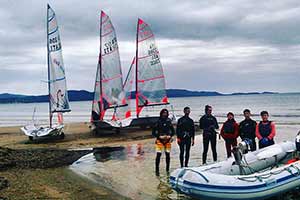 portacolori of the Circolo della Vela Marciana Marina: the crews of the 29er class will be engaged in the next weekend -11-12 March 2017 – in the 1st National Regatta scheduled at the Port of Rome.

In the race on the regatta field of Ostia, in the event organized by Nauticlub Castelfusano, three marinesi athletes at competitive debut in the acrobatic 29er class: the team Antonio Salvatorelli-Dennis Peria will be at sea that in the last season 2016, due to age limits , have successfully completed their experience with the class L’Equipe and Edoardo Gargano that, with the role of helmsman, will be in crew with a follonichese sailor, Elia Pancotto. The latter will use a boat made available by the Italian Sailing Federation.
The program includes 8 tests.